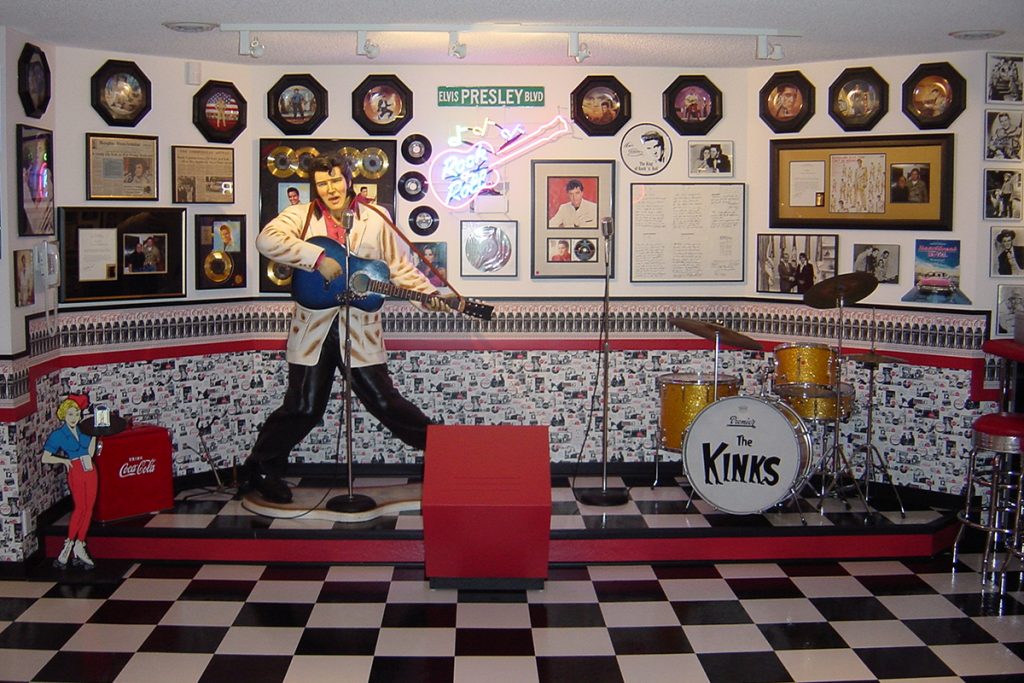 We’ve all had those moments when we find ourselves completely checked out of reality and lost in a daydream laced with nostalgia. You know those daydreams that bring you right back to the good times and all of a sudden you’re back in the day? Well lucky for Bill Hawkins, he doesn’t have to daydream about the good old days. He has them right there in his basement.

Welcome to Bill Hawkins’ Rock and Roll Room – the place where the sixties will last forever. Once you step foot inside his time capsule of collectibles, you’ll be transported to a world of 1960’s magic and charm, and you’ll immediately find yourself jamming atop his classic checkered flooring with The Temptations’ “My Girl” drifting from the authentic jukebox in the background.

The obsession started in 1969 when one of his friends sold him a ticket to Woodstock for $5. Yes, you read the right. Five dollars. So 18-year-old Bill Hawkins received tickets to one of the most influential events in the history of music and unknowingly had collected his first item that would inspire the next few decades of searching for and collecting any and all things sixties. The tickets would later be framed and hung proudly on the wall amongst more than 400 prized signatures like Elvis Presley, Jimi Hendrix, Bob Dylan, and Janis Joplin––just to name a few.

But autographs aren’t the only thing you’ll find on the walls of Bill Hawkin’s Rock and Roll Room. With the dawn of the internet, Bill has been able to discover and purchase all sorts of remarkable artifacts from the decade, and his collection is still growing. His room features any item that represents the events and culture that characterized the sixties. For instance, Bill Hawkins has framed and hung a copy of the Dallas Morning News on the morning after Kennedy was shot, an authentic gasoline pump, a jukebox, dozens of TV star signatures like Jay Silverheels and Clayton Moore from Lone Ranger, a full karaoke stage, a 1970 foosball table, and a 1968 pinball machine.

His collection quickly became so extensive that some form of categorization was necessary. Bill had previously purchased the Elvis Presley Boulevard sign, which sparked his idea to customize his own street signs to divide his room into different categories. These new street signs were hung on separate walls to organize and divide Bill’s mini-museum of artifacts into different sections. Among these sections, he hangs all his signatures in “Autograph Alley”, any 1960’s movie or TV star memorabilia in “Memory Lane”, odes to soul music in “Soul Street”, certain iconic artifacts, such as Elvis Presley’s personal cigarette lighter, in “Legends Lane”, and any special family items in “Hawkins Diner Drive.”

However, Bill Hawkins’ Rock and Roll Room is more than just a mini-museum of impressive sixties memorabilia. It’s an ode to Bill’s most cherished memories and represents the most pivotal points of his childhood and perhaps in the history of music. Although his collection features some of the most iconic items of the decade, Bill’s favorite and most treasured items are definitely the ones that carry personal significance and bring him back to his childhood.

It’s not too hard to guess, then, that Bill’s favorite item in his collection is the Schwinn Varsity bike that matches the exact bike he spent his summers riding through his small town home during his adolescence. The bike was given to him from his brother as a thoughtful gift and placed next to the Schwinn Phantom bike he already owned. For Bill Hawkins, these bikes are more than just a good memory in real time. They represent the innocent freedom that characterized his childhood summers. Bill Hawkins will tell you these bikes are his childhood personified and a tangible representation of his personal nostalgia.

Likewise, the Soul Street section of Bill’s room holds a special place in his heart because it’s dedicated to his love of soul music, which essentially sparked his appreciation of music altogether. Bill’s soul music fascination dates back to the earliest years of his life.

Since he can remember, Bill has always been naturally drawn to the deep and sultry sounds of the saxophone. Needless to say, when it was time to pick an instrument for his fifth grade music class, there was no question what instrument he would play.

Bill Hawkins started practicing his saxophone in fifth grade for one hour six days a week. With that kind of dedication, Bill was considered a prodigy by the time he was in eighth grade. However, if you asked Bill about this today, he would inform you that he wasn’t a naturally outstanding musician by any stretch of the imagination. He just worked hard day in and day out to improve his skills to get himself closer to achieving his childhood dreams of playing the saxophone in a band.

Eventually, a high schooler asked him to play in their R&B band, where Bill played the saxophone in front of live audiences all around the Twin Cities of Minneapolis and St. Paul. When asked about his experience playing in a band alongside the most talented musicians he’s ever personally known, Bill will tell you that being on stage as a teenager was one of the greatest experiences of his life. And that feeling right there is exactly why Bill Hawkins still loves the sounds of soul music––so much so that he named an entire section of his room “Soul Street” decades later.

It’s those kinds of unforgettable memories that make Bill Hawkins’ Rock and Roll Room so special. People often ask Bill how he remembers so much from when he was growing up, but for him the reason is simple: “I don’t think I ever forgot it because it’s always been in this room.”

Bill often comes down to his room late at night to just spend time reminiscing on what each item means to him, but he claims his favorite moments are when other people come to visit the room and remember the same exact thing. More than anything, Bill Hawkins’ greatest joys are in this room because it’s where all of his childhood memories are preserved in one place.